Venice is a city in northern Italy. It has been known as the “Queen of the Adriatic”, “City of Bridges”, and “The City of Light”. The city stretches across 117 small islands in the marshy Venetian Lagoon along the Adriatic Sea in northeast Italy.

Venice is world famous for its canals. It is built on an archipelago of 117 islands formed by about 150 canals in a shallow lagoon. The islands on which the city is built are connected by about 400 bridges. In the old center, the canals serve the function of roads, and every form of transport is on water or on foot.

You can ride gondola there. It is the classical Venetian boat which nowadays is mostly used for tourists, or weddings, funerals, or other ceremonies. Now, most Venetians travel by motorized waterbuses which ply regular routes along the major canals and between the city’s islands. The city has many private boats. The only gondolas still in common use by Venetians are the Traghetti, foot passenger ferries crossing the Grand Canal at certain points without bridges.
Adapted from: http://www.wikipedia.com

2. What transport crosses the Grand Canal for foot passengers at  certain points without bridges?
A. Gondolas.
B. Traghetti.
C. Waterbuses.
D. Lagoon.

3. From the text we can say that Venice belongs to a city of ….
A. water
B. ceremonies
C. buses
D. funerals

This text is for questions 4 to 6.
Text 2.
March 16th was my daughter’s 5th birthday so I baked a cute birthday cake for her. I decorated it with some of her favorite cartoon characters, It was such a wonderful experience for me. My wife inspired me to make this special birthday cake.

On that day, I went shopping and got all items for the cake. I never made it before, so I was a bit nervous. Before I made the cake I imagined how to decorate it, and then I started right away. I chose chocolate flavor and followed the steps in the recipe. And I finally I could make it. It was not bad at all.

All the people who were invited to the party loved the cake. I was very proud when my wife told the guests that I made the birthday cake by myself. I was satisfied to see the look on their face to know that I could make such a delicious cake. I promised my daughter I would make another cute cake for her 6th birthday party.

4.What i s the main idea of the second paragraph?
A.The decoration of the cake was interesting.
B.The cake made by the writer was delicious.
C.The writer made the birthday cake by himself.
D.Baking cake was a bad experience for the writer.

6. Why was the writer nervous when he baked the cake?
A. He was ashamed of his wife.
B. He could not make a cake at all.
D. It was his first experience to bake cake.
C. Some people were watching him.

For questions 7 to 9 choose the best words to complete Text 3.
Text 3.
Bird
Birds are interesting flying animals. They are vertebrates and warm blooded animals. They belong to aves class and they can be found all over the world.

Birds breath with their air pocket. Besides as respiration organ, air pocket also can enlarge or reduce their weight when flying or swimming.

There are many kinds of birds. Each bird has special characteristic. They have different morphology according to their food and their habitat. Some of them eat seeds, pollen, fish or meat. There are some species that live in land and the others live in water. Land birds live on their nest. Female birds have specific tasks. They lay eggs and feed their baby, beside that they look for foods for their baby.

8. What is the main idea of paragraph three ?
A.  Different  sorts  of birds.
B.  Function of bird’s air pocket
C.  Birds as cold-blooded animals.
D.  Birds have similar morphology

9. The followings are true about the bird, except…..
A.  Birds are interesting flying animals.
B.  They belong to Aves class
C.  Birds breath with their air pocket.
D.  Female birds have no specific tasks.

Once upon a time, there was a man who liked hunting very much. He often went to the forest to hunt any animal he met.

One day he went hunting into the forest. He intended to shoot any animal he saw. He brought his gun with him. When he was searching for his prey, suddenly he saw a bird perching on a branch of a tree. It was a dove. When he was aiming his gun at the dove, suddenly an ant came and bit his foot. He was so startled that he did not shoot the dove. It was safe and then flew away.

Several days later, the dove was flying over a lake. He saw an ant floating on the surface of the water. It was the ant that had saved the dove’s life from the hunter. The ant was almost drowned. The dove got an idea; he picked up a big leaf and dropped it onto the surface of the water near the ant. Luckily the ant could get on the leaf.

The ant tried to bring the leaf to the edge of the lake and landed on the ground. The ant was safe because the dove helped him.

11. The moral value that we can learn from the story is ....
A.  A good behavior will result a good thing
B.  Do not put off until tomorrow what you can do today
C.  Do not under estimate another people
D.  Do not see the people from the appearance

Dear Ismawati,
Hello! My name is Habibah and I am your new friend. I am fourteen years old and I am a Spanish. I live in Granada in Spain. Attached are photographs of the people in my family. My father’s name is Yousef. He’s a chemist. My mother’s name is Maryam. My brother’s name is Fauzan and my sister’s name is Raysa. I am the girl with short brown hair. My cat’s name is Pluto. He’s in the photograph with me.

What about you? What does Indonesia look like? What do you like? Who’s your favourite singer? Please write email soon and tell me about yourself.
Best wishes,
Habibah
(Reading and Writing Targets 2: Student Book, 1999, p. 4)

13. What is Habibah’s nationality ?
A.  Canadian
B.  Spanish
C.  Indonesian
D.  Japanese

14. The following statements are correct according to the text above, except ... .
A. Habibah likes opera better than pop music.
B. Habibah thinks that Math is a difficult subject.
C. Habibah has a brother and a sister.
D. West life is Habiba’s favourite singer

15. Habibah dislikes Mathematics   as it is very difficult.
The underlined word is closest in meaning to ....
A. easy
B. interesting
C. challenging
D. complicated

16. From the text above we know that ... .
A.  Ismawati is the recipient of the email.
B.  Ismawati and Habibah are old friends.
C.  Ismawati will likely visit her friend in Spain soon.
D.  Habibah knows that Ismawati also likes listening to music.

Butterflies are day flying insects of the order Lepidoptera. They are grouped together in the suborder Rhopalacera. Butterflies are closely related to moths from which they evolved.

The life of butterflies is closely connected to flowering plants, which their larvae feed on, and their adults feed and lay their eggs on. They have a long-lasting history of co-evolution with flowering plants. Many of the details of plant anatomy are related to their pollinators and vice versa. The other notable features of butterflies are their extraordinary range of colours and patterns of their wings.

Butterflies in their adult stage can live from a week to nearly a year depending on the species. Many species have long larvae life stages. But other species can remain in egg stages or a sleep in their pupil in order to survive winters.

18. How do the larvae of some butterfly species survive winter?
A. They live from a week to a year.
B. They remain asleep in their pupil.
C. They connect to flowering plants.
D. They are related to moths

19. What do butterflies evolve from?
A. Moths
B. Insects
C. Larvae
D. Flowers


To Our Beloved Student Yohanita.
CONGRATULATIONS
We would like to congratulate you on your success to be the best graduate of
SMP Al Azhar this year.
You deserve to get such a title because of your best marks of all subjects of the
final examination.
We are proud of you so much.
We hope that you will inspire the students.
Mr. Suyanto M.Pd

22. The text is written by the writer … on her success to be the best graduate of the school.
A. to ask for Yohanita’s attention
B. to congratulate Yohanita
C. to show Yohanitas’s ability
D. to send his best regards

23. From the text we know that Yohanita is a … student.
A. rich
B. clever
C. boastful
D. beautiful

24. Why did the writer ask Ryan to come to school?
A. To finish their project.
B. To meet his teacher.
C. To receive Herdy’s present.
D. To ask for his buddy’s friend. 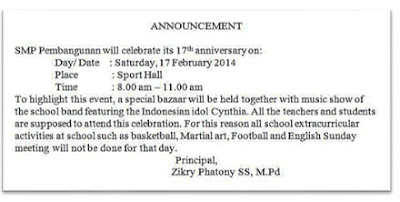 26. What did the school do to celebrate its anniversary?
A. Held a special bazaar.
B. Had a martial art competition.
C. Did all extracurricular activities.
D. Highlighted all events well.

27. The school did not have all the extracurricular activities on that day because … .
A. the sport hall would be used for the celebration of the school anniversary
B. all students had to attend the bazaar and buy everything sold in the event
C. there was an attractive music show performed by all students of the school
D. nobody was interested in playing basketball in the sport hall that day

Question 8 to 9 based on the following text!

28. The main idea of the second paragraph is ….
A. Mrs. Deni had an accident.
B. Mr. Deni was proud of his son.
C. Malik asked his the neighbor for help.
D. Mr. Deni and his other children had gone.

31. Where will the basketball competition be held?
A. At the school basketball court.
B. In the nearby sports center.
C. At the center of the school.
D. In the city center.

34. What is the topic of the text?
A. Elephant.
B. Elephant, an intelligent animal.
C. The function of elephant’s trunk
D. The characteristic of elephant. 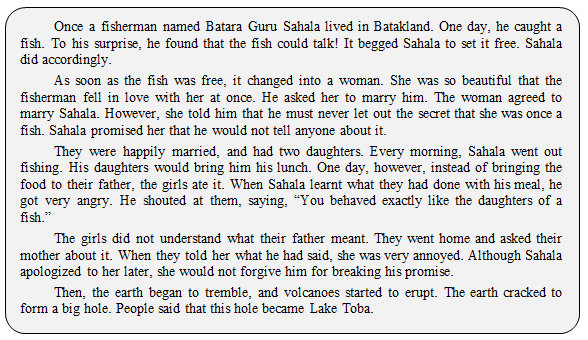 36. Why did the girls’ mother get angry with Sahala?
A. She broke his promise.
B. He did not get the food.
C. She apologized for the daughters.
D. The girls did not understand him. 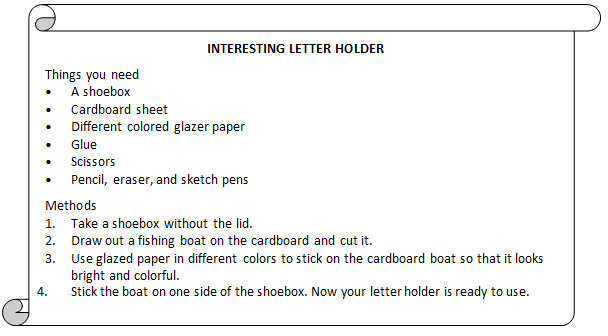 37. “Draw out fishing boat on the cardboard and cut it.”
What does the word “it” in the sentence refers to?
A. The cardboard.
B. The fishing boat.
C. The scissor
D. The lid.

Text 17.
41.  Complete the following text with the right forms of the verbs.

Uncle Tomi is my father’s younger brother. He is a very interesting man. He (a) ... near us with my Aunt Andini and my cousins Salsa and Bila. Sometimes, I go to his house.

Uncle Tomi is a doctor. He (c) ... for a big hospital. He is a well-known doctor in the city. He always helps sick people. He goes to the hospital every day.

He is very fond of vegetables. He never eats without them. He often goes to the market (d) ... vegetables. Sometimes, I go with him to buy them.

To: Santi
I have got the news that our friend passed away one hour ago. We are going to go to her house soon to attend the funeral. Please be here before 1 p.m.
Sumarni.
Tati

42. Find words in the text above that are closest in meaning to the followings
a. died
b. information

43.  Rearrange these words into the correct sentence.