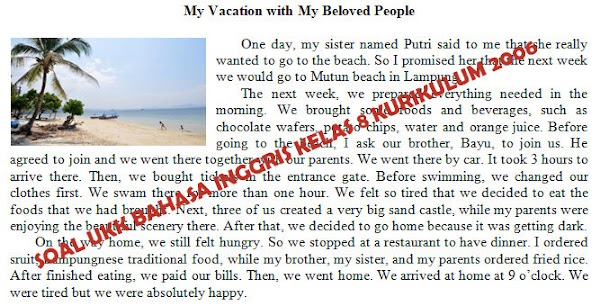 Read the following text and answer questions 1 to 4.

My Vacation with My Beloved People

One day, my sister named Putri said to me that she really wanted to go to the beach. So I promised her that the next week we would go to Mutun beach in Lampung.
The next week, we prepared everything needed in the morning. We brought some foods and beverages, such as chocolate wafers, potato chips, water and orange juice. Before going to the beach, I ask our brother, Bayu, to join us. He agreed to join and we went there together with our parents. We went there by car. It took 3 hours to arrive there. Then, we bought tickets in the entrance gate. Before swimming, we changed our clothes first. We swam there for more than one hour. We felt so tired that we decided to eat the foods that we had brought. Next, three of us created a very big sand castle, while my parents were enjoying the beautiful scenery there. After that, we decided to go home because it was getting dark.
On the way home, we still felt hungry. So we stopped at a restaurant to have dinner. I ordered sruit, Lampungnese traditional food, while my brother, my sister, and my parents ordered fried rice. After finished eating, we paid our bills. Then, we went home. We arrived at home at 9 o’clock. We were tired but we were absolutely happy.

1. The text is about....
A. the write’s trip took 3 hours by car
B. the writer’s experience at Lampung restaurant
C. the writer’s holiday in Mutun beach in Lampung
D. the writer’s tiredness after having Study Tour to the beach

3. What did the writer do after visiting Mutun beach?
A. Went to the hotel
B. Went to the restaurant to get dinner
C. Went home directly without dinner
D. Stay near the beach to enjoy the beautiful scenery

4. ”We were tired but we were absolutely happy”
The underlied word can be replaced by....
A. bad C. glad
B. sad D. mad

8. Andra : What do you think of having lunch at that restaurant?
Tari : I don’t think that is a good idea.
The underlined expression shows ....
A. agreement         C. apology
B. disagreement D. uncertainty

Read the following text and answer questions 9 to 12.

The last school holiday, I spent the time with my family on vacation to a relative's house in Madiun, approximately 6 hour trip by bus from our home in Malang.
On the way there, we saw many beautiful views such as rice fields, mountains, etc. Having arrived at the uncle's house, we were greeted by our relatives who had not met us for a long time. The next day, we walked around the town of Madiun until the sky got dark. Finally we decided to go home at 6:00 p.m. on that day.
On the next day, I forgot that it was the New Year. Sudenly, one of my cousins came and asked me to celebrate the New Year's Eve together. At night, I went together with him to the center of the city of Madiun which had already been so crowded because a lot of people who also wanted to celebrate the New Year with his family. When the countdown arrived, the sky which was dark at once then became so colorfully decorated by fireworks. We prayed together and watched the fireworks lightening the sky that night.Suddenly, the holiday passed quickly. The last New Year's holiday experience in the city of Malang was so impressive forme.

10. How long did the writer spend to go to Malang from his city?
A. Six hours C. One night
B. One day D. Almost two days

11. Where did the  writes and his cousin go at night  ?
A. They went home
B. They came to centre city
C. They went to other relatives’ house
D. They visited their uncle’s house to celebrate New year Eve

12. ”.... approximately 6 hour trip by bus”
The underlied word can be replaced by....
A. almost C. appropriate
B. apearence D. presumably

15.Leo : I think our city is very hot at the moment.
Virgo : I don’t think so ....
Our city is much cooler than other cities in this country.
A. I know it C. He forget it
B. I am thinking of D. In my opinion
16. Titi : I feel tired and I feel dizzy.
Toto : I think ….
Don’t leave the bed if it is not necessary.
A. I must take some rest, too C. you must sing
B. you should lie down and have some rest D. I will take you to the hospital

18. Ahmad : .... the nearest Mosque, Yunus?
Yunus : Sure. Walk on for two blocks and turn right. You will find the Mosque on your left.
A. Would you help me C. Please, give me the direction
B. Could you tell me D. Can you accompany me

Read the following dialogue and answer questions 20 to 22.

Ramzi : Nice day, isn’t it?
Cika : Yes, it is. Nice weather we’re having.
Ramzi : Look! This is a fantastic sight!
Cika : Yes, I agree. I think it’s spectacular.
Ramzi : The weatherman says it’ll be sunny today.
Cika : Really? Let’s go camping then.
Ramzi : I’m sorry, I’d love to but I can’t. I have to finish my geography project.
Cika : Oh, by the way, how was your vacation?
Ramzi : We had a great time. But during the trip, we had a flat tire.
Cika : That’s terrible.
Ramzi : (bleep!) That’s my mobile phone. I’m afraid I must go now. Have a good day.
Cika : You too. See you!

Read the following text and answer questions 23 to 26.

King Fergus and Queen Elinor ruled the kingdom of DunBroch in Scotland. They had three sons and one daughter, the beautiful Princess Merida. All four children were mischievous! Queen Elinor tried to teach Merida how to behave like a perfect princess. But Merida liked to slip away from the palace to practice with her bow and arrow. She was a skilled archer.
One night, the queen announced that three clans were coming to visit. Each would present a suitor to compete for Merida’s hand  in marriage. Merida was horrified. “I won’t go through with it!” she shouted. To Merida’s dismay, the suitors arrived as planned. Merida sat waiting on her throne for the archery contest to begin.
She knew she could handle a bow and arrow far better than the suitors could!Once the suitors had taken their shots, Merida marched onto the field. The queen yelled for her to stop, but Merida didn’t listen. She fired her arrows and hit each target dead center. She had won! Now she wouldn’t have to marry anyone!
(Sumber: http://freeenglishcourse.info )
23. What does the text mostly talk about?
A. Princess Merida         C.The clanns fighting
B. King Fergus Battle D. The legend of Scotland

25. What happened to Princess Meida after deciding to fight in the field ?
A. Every one shouted to her
B. She could not use her arrow well
C. She neglacted the queen advice to surender
D. The Princess shot all the target and won the contest

26. The Princess was described as awoman who ...
A. was foolish and greedy         C. was disobey, friendly and lazy
B. was brave, smart and pretty D. was very rich, strong but foolish

Read the following text and answer questions 29 to 30.
……………….. (29) there was a kingdom in West Java. The kingdom was ruled by a king. People called their king His Majesty Prabu. Prabu was a kind and ……… (30) king. No wonder if that country was prosperous. There’s no hunger in this kingdom.

Choose either a, b, c or d for the right answer. Decide the right tense whether it is past tense or past continuous.

Read the following text and answer questions 36 to 37.

I would like to invite you come to my 13th birthday! Bring your sincere present
Place : Dapur Putih Restaurant
Dress Code : White Casual Dress
Time : 07.30 p.m – 09.00 p.m
Day/Date : Saturday Night/1st  May  2015
I’m waiting for your coming! Come before 09.00 p.m and wear your White casual dress!
Thank for your nice attention friend

36. After reading the text above, what will likely the readers do?
A. Regret the invitation C. Join the party at 8.00 p.m
B. Ignore the invotation D. Buy new casual party gawn

Read the following text and answer questions 38 to 40.

Dear  : Dikki
Naura and I are going to wait for you at Naura’s house to do the Mathematic project for our group. Please be there punctually after school at 03.00 p.m today.

40. What will likely Dikki do after reading the text?
A. Come on time to Naura’s house
B. Be late to do the Mathematic project
C. Forget Ghani’s message to do the project together
D. Do the assignmnet as soon as possible without Naura and Ghani

II. Uraian
41. Read the text and answer the questions.
I had my adolescence when I was thirteen.
It started with acne that showed up on my face. It was very annoying. It lowered my self-esteem and I was embarrassed to come out of my house and play with friends.
Fortunately, my Mum gave me a good medicine. In three weeks, the acnes started to vanish although those showed some black spots in my face.
That was my bad experience with adolescence, though there were still lots of good experience too.

43. Complete the text below with the correct words  in the box.

Once upon a .... , there was a young girl named Cinderella. She .... with her step mother and two step sisters.
The step mother and sisters .... conceited and bad tempered. They .... Cinderella very badly. Her step mother made Cinderella do the hardest works in the house; such as scrubbing the floor, cleaning the pot and pan and preparing the food for the family. The two step sisters, on the other hand, did not work about the house. Their mother gave them many handsome dresses to wear.

44. Write down a dialogue about “Offering help” based on the following situation!
Your  teacher brings many kinds of books. You offer help to carry them. Your teacher likes it and says  thanks  to you.
You : .... ?
Your teacher : ....